After the fall months pass, the wind sloshes the harbor water near Pordic, France with an eerie silence. A quiet reserve takes over what seems to be a bustling area for visitors during the warmer part of the year. But now summer vacation is on pause, returning many communes in the northwestern region of Brittany to the year-round residents.

Even though the pace changes during the holiday season, that doesn’t stop Brittany from singing its pure, nautical lullaby.

I visited the region during Christmas-time in 2016 thanks to a friend who invited me chez elle for two weeks. After morning tea, we took off on a whimsical drive to see the cliffs overlooking small beaches. The light touches the rocks and the surrounding grasses at certain points during the day with absolute serenity, begetting a red hue among the algae and seashells. I highly recommend bringing a blanket and wearing a warm coat, as the sea winds can be especially fierce. Although, thinking back on it now, a quick lunch on the cliffs would have also made for a lovely memory!

Another mid-day excursion you must fit into your itinerary in Brittany is the balade autour de ports [stroll around the harbors]. And given that the region is practically known for its seafood, there are plenty of options. Since I stayed in the area during an off-season, the pathways were abandoned enough to take pictures of the lighthouses without hurry. I must admit, the emptiness leaves a curious impression of the harbors during the summer, packed with hungry tourists eager to renounce the congested cities like Paris for something more authentic. Yet the appreciation remains. Winter is the time off that Brittany welcomes sans complaint.

Stop for lunch at a crêperie for a famous Brittany galette, or even a restaurant along the harbor offering a delicate selection of fish.

Boats anchored in the harbor waiting for their owners’ return. 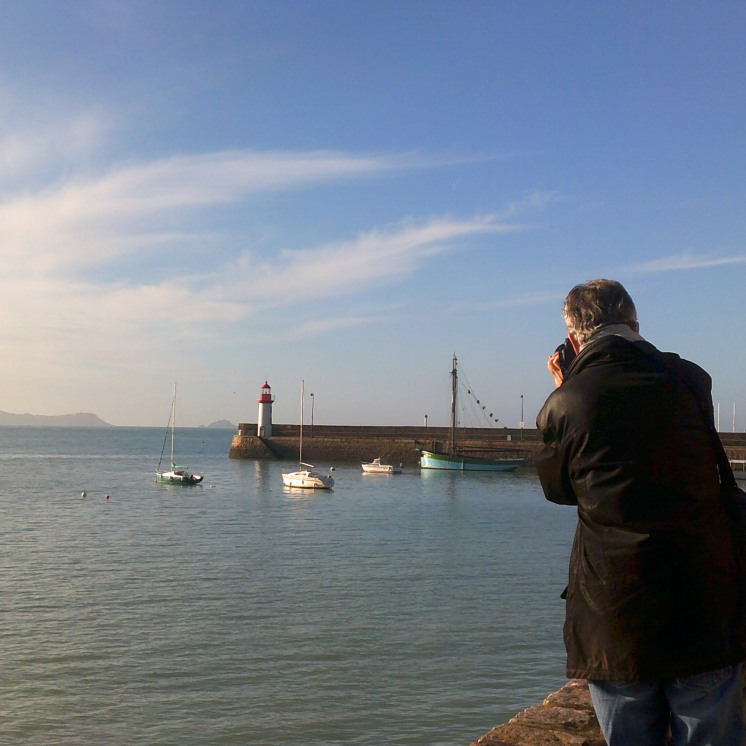 Frenchman photographs a lighthouse on a miraculously, beautiful day.

Seafood at the marché

Speaking of seafood, the freshest, most succulent tastes of the ocean await at the market. In Quimper, France, I went with a couple who hosted me for a weekend to buy dinner for the evening. The conviviality here struck me by surprise. I had a difficult time swallowing it.

Men and women selling all kinds of cheeses, meats, and sweet bites were excited to speak to me. For total immersion in the Breton-culture, I advise coming to the market ready to ask questions and hear advice from the fishermen having just returned from the sea that morning to sell their catch. They are highly receptive to customers wanting to know the best way to cook their seafood.

That same night, my hosts and I spent four hours eating what we bought. For starters, we ate langoustines, a sort of giant shrimp. Removing the head and legs were, frankly, a chilling, new experience. With the first bite, however, a tinge of sweetness mixed with the taste afforded only from a fish caught that day brought me just to tears of joy. Next, after I recovered from my seafood epiphany, I was asked to clean the

mussels, which required picking the algae off the shells and ensuring that none of them were open. I cut the scallions for the sauce, and then my host took care of the rest, so I unfortunately cannot retell the recipe. But I will say that the buttery fish melts on the tongue with unparalleled pride– a true cause for celebration.  Finally, I ate the highly-esteemed Coquilles Saint-Jacques. The scallops were served with a small portion of rice and swathed in a blanket of rich, warm sauce not unlike the one served with the mussels.

That night, I think I died and came back from seafood heaven. 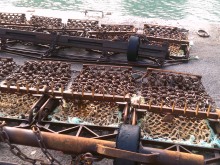 Les dragues: Dredges like these sit near the water, where they will be used to fish for scallops.

An artist painted this table arrangement for sale in a specialty store. The lobster and algae design is unique insofar as the art delineates the table pieces.

Boat ride to a secluded island

Alas, the stay in Brittany did have to end at some point. While I was sad to leave, I fervently enjoyed the 10-minute speedboat ride to the Island of Bréhat. Make sure to verify the hours before heading out because you don’t want to keep others waiting, like we did. Once we parked, we ran to the ticket counter and from there continued, hurriedly, to the boat. The captain yelled

that he was waiting, and with some embarrassment we slid in between a crowd of people looking at us in amusement. In any case, the ride is breathtaking, refreshing, and a cold slap in the face in December.

Once on the island, you can walk the long path to the mainland, where you will discover other tiny paths and scenic views. We picnicked on a ledge looking out on a little beach where seagulls slowly crept their way over in search of leftover crumbs. Stroll casually back to the boat after lunch, or enjoy the island a bit longer before the last boat leaves the island.

Follow me next time to discover art workshops in Paris replete with psychotic, drug-induced explosions of creativity.