In December 2016, Lab 14 showcased a dystopian maze of graffiti, movable installations, and sculptures in the Montpartnasse district of Paris.

Formerly a post office, close to fifty artists participated in a project well aware of its three month expiration date. To some, an ephemeral concept that sought to push urban art beyond its structural limitations, wrote Clémentine Gallot for Libération.

Still, the whole sequence honored a grungy ethos in one delicious moment of self-declaration: This is hell on earth and we’re here to welcome you in all of its beautiful impermanence. 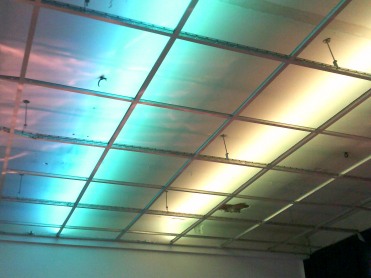 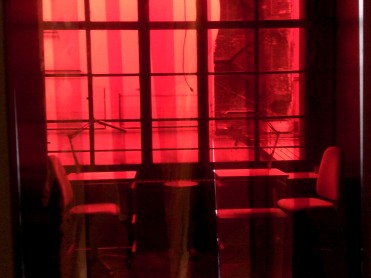 I had the pleasure of visiting the exposition a little after New Year’s by happenstance.

That’s right, Google didn’t recommend it and the French didn’t divulge the secret. What’s more,  I got to it before any of the French press wrote reviews raving about the happy marriage between La Poste and street art, journalists said at Le Monde in February 2017.

a nightmare that kept coming back with twisted satisfaction.

On the first floor

After paying 2 € for entry, the ground floor gallery appeared as any other off-the-wall presentation, one not trying too hard to shock the public but still conscious of its ability to disturb an unsuspecting mind. A long, dimly-lit corridor led to a room where

paintings of Gremlins and geometric structures among the likes of Seize HAPPYWALLMAKER (see right) quenched the spectator’s tongue with a futuristic thirst for more.

The opening works presented at Lab 14 were edgy, but didn’t satisfy. I wanted Parisian art that scarred; that gave me a pain to take home, or at least a hallucinatory visit to the extraterrestrial and back. Something to remember.

Up until that point, nothing  besides the aerosol fumes corroding my lungs from all of the graffiti had done that.

It became evident that the building was intentionally unkempt from the trashy, dilapidated state of the whole place.

From what I gathered at the entrance, artists were taking residence in the space until the end of February 2017, after which Lab 14 would be no more once the bulldozers came through to demolish it.

Under the guise of an artist-to-viewer experience, the exposition seemed, for all intents and purposes, curiously innocent. The public had the unique opportunity to watch art transform week after week with ample chance to directly engage with the artists should they make themselves available.

Yet the ascent to the second floor would later prove a nightmare that kept coming back with twisted satisfaction.

To the second floor

A staircase contrasted with pieces of colorful wood jutting upwards brought me to a plastic curtain hanging from a doorway. Parting the strips, I had to wonder if I was actually in the back of some butcher shop where at any moment a man wearing the head of boar would step in front of me, brandish his rusty cleaver, give me a heart attack, and then make me his next grind.

The room was a junction point from which the artists’ studios branched off in all directions, but ultimately lead to a dead-end. I remember feeling like I had crudely entered without permission inside a squatter residence. In reality, talented artists were up there doing stuff beyond my expectations.

Each room had something new to offer.

In one, a giant robot with a body made up of old Sony TVs.

Another with solar panels on the floor reflecting aqua-marine neons onto the ceiling from intermittent, flashing bulbs.

One with nothing but a table and two chairs (see top). The artist performed a light trick that made the inside appear red from the outside, but entering the room, the eye was fooled and natural light from the window revealed nothing out of the ordinary.  Something akin to Kubrick’s The Shining.

The succeeding installations had something more chaotic in store for me than the next. For better or worse, I got my 2 € worth, and when I left, the disquieting churn of acid in my stomach gave me a pre-vomit sensation, but settled out into nothing but an electric rush.